Skip to content
Home > ai > More ways to compete and win in the AWS DeepRacer League and two new champions!

More ways to compete and win in the AWS DeepRacer League and two new champions!

It’s been a busy week for the AWS DeepRacer League. The world’s first global autonomous racing league allows machine learning developers of all skill levels to get hands-on with machine learning in a fun and exciting way.

On April 29 2019, the virtual circuit of the AWS DeepRacer League opened. The virtual circuit allows racers to compete from anywhere in the world by using the AWS DeepRacer console. Developers can put their skills to the test by competing in the Virtual Circuit World Tour, on virtual tracks inspired by famous raceways that will be revealed each month. They will race for prizes and glory, and a chance to win an expenses-paid trip to the AWS DeepRacer Championship Cup at re:Invent 2019. The first racetrack on the virtual world tour is inspired by the famous raceway in Silverstone, UK, named the London Loop. It’s open for racing until May 31, with developers from all parts of the globe already posting great lap times. Get racing today for a chance to win the AWS DeepRacer League Virtual Circuit!

Winners at the Sydney summit

In addition to the virtual circuit, race seven on the AWS Summit calendar took place in Sydney, Australia. The AWS Summit in Sydney was a two-day extravaganza, bringing together the cloud community down under, to learn and get hands-on with AWS services. The AWS DeepRacer League had three tracks for racers to compete on for more than 48 hours. It didn’t disappoint as hundreds of racers took to the tracks to compete for the champion’s spot on the podium.

Matt Kerrison (Matt@GJI) took first place, traveling to Sydney with three other teammates to learn how GJI Group, a Brisbane-based design and communications company, can continue to innovate with the help of AWS. They had no idea that they would walk away with the AWS DeepRacer trophy and two of the three of them in the top 10.

The Sydney winner, Matt Kerrison, started in the virtual league quickly after it launched on April 29th, and attended the AWS DeepRacer workshop on day two of the AWS Summit. He continued to tune his model overnight, which scored him a winning lap time of 8.29 seconds, just 1 hour and 45 minutes before racing finished.

Matt is now on his way to AWS re:Invent 2019 in Las Vegas, Nevada, to compete for the championship cup. In preparation, he and his colleagues plan to host hackathons to continue experimenting with, and building knowledge of AI and machine learning, as well as participate in the virtual league.

On to Atlanta, Georgia, which rounded out the week. More developers raced live on the track and attended workshops to learn about machine learning.

Our top three racers in Atlanta had sub 10-second lap times. Amelia Hough-Ross, a deputy chief technology officer, is the first female to stand on the podium and one of the most determined. Amelia had scored a third-place position during the morning hours of racing. However, she was moved down to tenth during the day. She went away and trained her model for several hours, and with only a couple of hours of racing left, she came from behind to clinch the third place finish. She’s excited to try out the virtual league, where she can also compete to win her place in the finals at re:Invent 2019. She also wants to see what improvements she can make to her model for the upcoming US summits in June and July. Amelia can score even more points for a chance to advance. 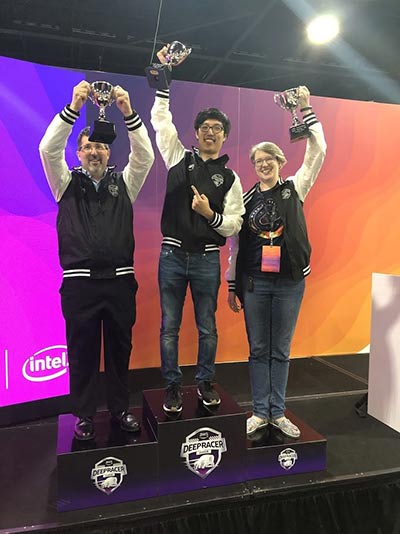 Our Atlanta winner was Kevin Byuen, the only developer in Atlanta to beat the 9-second barrier. For his winning time of 8.71 seconds, he took to the track four times. Kevin prepared for the event for more than a week and learned from the AWS DeepRacer community in order to build the winning reinforcement learning model.

The AWS DeepRacer League is in full swing. In case you missed it, the AWS DeepRacer League now has a 21st stop on the schedule before re:Invent, at the inaugural re:MARS event. This event pairs the best of what’s possible today with perspectives on the future of machine learning, automation, robotics, and space travel. Developers of all skill levels can start competing today and in as many races as they like. Accumulate points throughout the season to earn more chances to win and advance to the AWS DeepRacer Championship at re:Invent 2019.

Alexandra Bush is a Senior Product Marketing Manager for AWS AI. She is passionate about how technology impacts the world around us and enjoys being able to help make it accessible to all. Out of the office she loves to run, travel and stay active in the outdoors with family and friends.